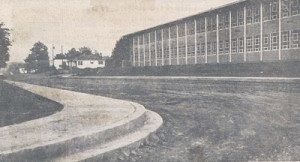 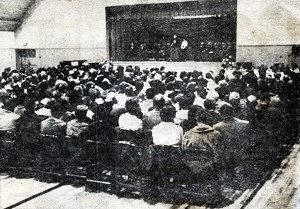 Pictured (left) is the north side of the main building taken Wednesday, October 14, 1959. A bond was issued November 14, 1957, for an amount of $1,500,000 for the construction of both Jenifer Junior High and Sacajawea Junior High. Contracts amounting to a total of $723,996 were awarded in December, 1958, for construction of the two buildings on the Jenifer campus. One building contained 38,176 square feet and would house all the classrooms. The other building contained 23,379 square feet and would house the auditorium, gymnasium, cafeteria, and shop. The shop wing was omitted in order to keep the overall costs within available funds. The square foot cost averaged $12.25, including architect fees. The Jenifer site originally contained approximately 10 acres and was purchased in 1940. Several parcels have been added since. The building originally contained 22 classrooms, a library, cafeteria, and auditorium-gymnasium. Over 600 attended the dedication of the newly built school (pictured right) as Jenifer Junior High School opened its doors to students. 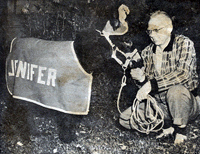 Jenifer Junior High school was named after Joel Jenifer, a Lewiston educator from 1901 to 1929. Jenifer came to Lewiston as a teacher in 1901 and was named the high school principal in 1905. He served as superintendent of schools from 1922 to 1929. Jenifer Junior High School’s 2-month-old burro mascot, Julius Caesar (pictured left), was named just 2 weeks after students moved into the new building. Dressed in a red and white cloak, hat and bridle, Julius Caesar paraded the school colors at athletic functions. Principal Harvie Walker made sure the burro had shoes for indoor appearances. Julius Caesar received his name by a vote of the student-body. Julius was only about 3 feet high and grew another 6 inches during his reign at Jenifer. 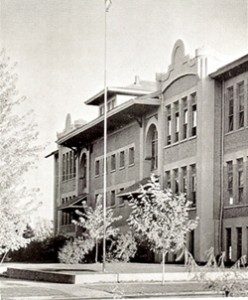 The building to the right was completed by 1914 and served as the junior high school from 1929 – 1959. It was demolished in the late 1960’s after both Jenifer Junior High School and Sacajawea Junior High School were constructed and opened to students. The current Lewiston High School Science and ICA buildings now occupy the property where this building sat. 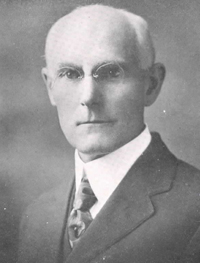 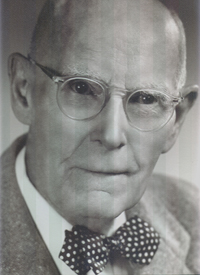