You Wouldn’t Believe It – Jan

We have some cool and fascinating facts about peppers to tell you about.

You wouldn’t believe the hottest chili pepper in the world is so hot it could kill you.

Here’s a picture of the hottest peppers. 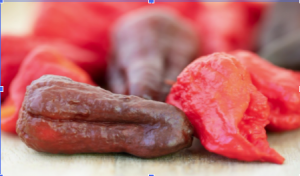 The “weapons-grade” Dragon’s Breath chili pepper is so hot, it’s downright deadly. If you ate one, it could potentially cause a type of anaphylactic shock, burning the airways and closing them up.
We got these facts are from https://bestlifeonline.com/world-facts/

Green, yellow, and red bell peppers are not actually the same vegetable

These vegetables are not always the same plant. Though some green pepper. are unripe red
peppers, green, yellow, orange, and red peppers are all unique plants. with their own seeds.

Bell peppers are usually sold green, but they can also be red, purple and yellow.
Facts from this site Vegetables: Fun Facts

Peppers are actually fruits because they are produced from a flowering plant and contain seeds-most people think of them as vegetables. Red bell peppers are sweeter than green ones. because bell peppers sweeten as they ripen.
Fact from www.natureandmore.com

Back to Golden News Home